This season we have seen more and more parks start offering the NO BOO pass for there Halloween events.  The NO BOO pass is a light up glow stick that hangs around your neck.  When you are going in to a scare zone or house, the monsters are suppose to not scare you.  We asked the In the Loop team there thoughts on the NO BOO pass.

No Boo? More like NO WAY!. This is by far the most asinine thing I have ever seen. Haunted Houses, unless designed for children like the ones Cedar Fair does during Camp Spooky, are meant to be scary. You are going through a house that’s supposed to startle, scare, fright, etc. and if you don’t want to be any of those things that why are you at the event? The fact the park is offering this service would do nothing but piss me off as a guest who is there to be scared because if someone in front of me has this on all the scare actors will back off and then I won’t get scared either. This seems like a pure money grab and I would love to be inside the head of the person that first came up with the idea and then smack them from the inside out! As a fan of Haunt events, if I go to a park and a group has this in front of me, I will promise you I will be at Guest Services at the end of the night asking for a full refund.

I think the “No Boo” glow sticks are a good idea for parks. First it is another thing they could sell and generate more revenue from. Second while you might enjoy being scared at a park, others people completely hate the idea. Also some people have no idea that there is a scary Halloween event going on at the park and might just be looking to use their season passes for a nice night out with family and grab some night rides on some of their favorite coasters.

No boo necklaces are a great way to make some extra revenue from those who were dragged with their friend’s to the park or just there to enjoy the park. If you are going to want to come to a Halloween event and do not want to be scared then please stay out of the lines for mazes as they are already congested bad enough. Please make way for those who enjoy the haunt expirence and spend your time on the coasters, flat rides, and shows. No Boo = no mazes in my eyes. PS. I saw girls holding up their boo necklaces like a cross to vampires at every actor in the park. 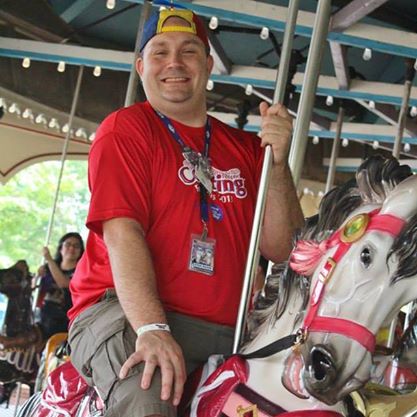 Why in the hell would you go to a Halloween event and by this?  This just annoys me.  Its like parents who bring there 5 year old’s to haunts, and all they do is cry because there scared.  WHY ARE YOU HERE!  If anything Halloween events need to push the limits even farther!  I want more scare!  I guess you could make an argument about going with friends and not wanted to be scared in scare zones.  Fine.  Buy it and hold our bags well we go in the house.  But there is NO reason they should be aloud in the houses with these passes.

The No Boo option in my opinion is a great idea for parks. However, my personal feelings are that it should be a free or low cost option. Hell there’s even the idea of doing a “5 dollar payment but return the no boo at the end of the night and get 3 dollars back,” just like lockers. That way the park can at least get a replacement or if the guest wants a souvenir…there you go! But again, WHY WOULD YOU GO TO A HALLOWEEN EVENT IF YOU DO NOT INTEND ON GETTING SCARED!?!?!? If you have a No Boo, you shouldn’t be walking into a haunted house…

I think that the No Boo passes are a good idea for the park. Often times there are members of groups that want to hang out with their friends but aren’t really able to handle the scares that go along with Halloween events. With that said, I believe that if a person is wearing a No Boo pass, he or she should not be allowed to go into the mazes. The mazes are a separate attraction and if someone wishes for no one to scare them then they should just wait for their group at the exit. No Boo passes should only be for walking around the park and getting through the scare zones.

Boo No more is a joke. I know people say it’s good for the young children, but I say if you don’t want them to get scared then don’t bring them to the park when it’s haunt time. Yes it’s easy for me to say this because I don’t have any kids, but haunts are meant to scare people. Some parks have “safe” ways around scare zones which is not to bad, but charging people to not get scared is just down right stupid. One time at the park, I saw a kid with a no boo glow stick come out of the scare zone. This wouldn’t have bothered me so much if there wasn’t a safe passage way right next to the scare zone. There are plenty of stuff to do that is family friendly around this time of year.

I think the No Boo is a great thing. The park makes money off a really simple necklace that lights up. I just think monsters won’t go after the group if someone in the group has the light. I think friends should pick who they go to parks with, if someone was to require a no boo necklaces I wouldn’t hang out with them in a park. I have no problem with the idea though for others.