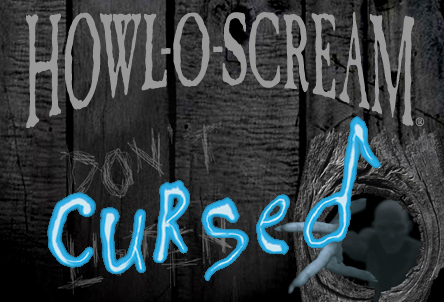 I visited Busch Gardens Williamsburg back on October 5th to not only check out the park and to also attend the Howl-O-Scream evening. If you are planning to visit Howl-O-Scream you will only need to plan on purchasing a day ticket to the park as the event is not an extra fee. NO special wrist band. NO park closing at 6pm and reopening for an extra fee. This is all included in your days admission. This is also of course free to Season Pass Holders. 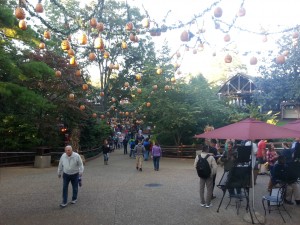 This years Haunt is themed as “Cursed” and the line I seen marketed on shirts, merch, and maps, was “Don’t Listen”.  I will be honest I am not to sure what exactly this was suppose to mean. The theme was not easy to make out through out the park either. I am hoping I may of just missed the obvious things that were to sell the themed idea but I just did not see them.

The park in the evening slowly starts to transform into Howl-O-Scream with each of their Scare Zones starting to come to life. They actually call their Scare Zones “TERROR-Tories” The Zones you could find were

Ripper Row: a Jack the Ripper inspired zone located at the entrance of the park.

Demon Street: a burning city with Demons running around and techno music blasting out of a flaming skull.

Wendigo Woods: which they describe as “The Wendigo was thought to be only a legend ….until now. Unravel the mystery or fall prey to the terror in the trees”. I will be completely honest. I had no idea what area Wendigo Woods was until looking at the Park Map again. This area was themed like a containmentarea. Like some type of disease outbreak has happened. You entered electric fences with watch towers looking over the area. This was a complete shock to me that there were some type of mythical creature in the trees. 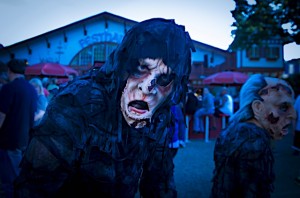 Vampire Point: a village infested with Vampires. It also had a bar that was opened all day with Vampires serving drinks from an outdoor Kiosk.

Over all the “TERROR-Tories” were not very good. Not very many scharacters walking around, not much done to the areas to theme them out. Other than the fore mentioned bars and the containment area that was built that in the end just confused me on what the area was even themed too.

As for the mazes that they had to offer at Howl-O-Scream you could find 6 located through out the park.

13:Your Number’s Up: I will just get this one out of the way first. I did not get the chance to visit this maze. The line was moving painfully slow and we were running out of time at the park. I heard the guests say it was terrible so I decided to ride some coasters at night instead. Since I am from California coasters took priority.

Catacombs: We had somehow also missed this maze as well.

Root Of All Evil: This maze was located way behind Curse Of Darkcastle in the Germany area of the park. My initial thoughts were “Busch Gardens wins best landscaping every year so this maze is going to be fantastic! Boy was I dissapointed. More than half of the maze is located without a roof on it, so its considered outside. This isnt always an issue with mazes but this maze just made me feel like I was walking through their back stock of old plants and bushes. I was prepared for the people in Gilly suits covered in plants but I think I may of saw 2 the entire maze. I think I saw less than 8 scharacters in the maze. Maybe they were just hiding too good for me to see them but again this maze felt as though we were just walking through an empty maze. We weaved through a few green houses with some material hanging in front of our faces. I think the best part of the maze may of been the green house with the strobe light and and the material in our faces where 2 of the 8 scharacters were located.

Over all I give this maze a 4. There lacked  a whole lot of effort in this maze. It literally felt like a nursery. The lighting was awful, there were no blind spots, it just was a poorly designed idea.

Bitten: This maze is located in the old station of Drachen Fire all the way in the very rear of the park. This maze was themed to the classic Vampire style. This was a tightly winding maze and was properly layed out but poorly themed. Very little scharacters were through out this maze and it felt like a lonely walk through dark hallways. They did have one great scare with doors blasting open and flashing strobe lights behind the vampire lady as she reached out to guests. The maze also featured a TON of drop window scares. The Maze length was good but there were a lot of wasted areas that contained nothing.

Over all I give this maze a 5. Not only was Drachen Fire a failure but so was this maze. It may entertain those who easily scare and do not get bored by just wondering through nothingness. I have heard this maze has been in this location for several years now and lets just hope they start over fresh next year with a better maze.

Cut Throat Cove: Cut Throat Cove is a Pirate themed maze that is located back in Fiesta Italia. You wonder your way through little shacks and shantys that also wonder through nicely themed outdoor scenes. It may be their best decorated and themed maze. The maze starts off ok but once again is missing scharacters. I actually saw so little scharacters I started to count how many I saw. I saw less than 10 people working a maze that was by far the parks longest maze.  Its a shame that this maze lacked the talent inside as it could of been a big hit.

Over all I give this maze a 6. They were really lacking the talent to make this maze come alive. It could be the best maze in the park with a little tweaking and some real life pirates in there. This is also their infamous maze that lost their severed heads due to some sensitive guests who some how linked a severed head to the ISIS problems the country was facing at the time. With or without the heads my opinion would of stayed the same about this maze.

Deadline: This Maze was located in the base of the Pompeii attraction. It was themed as a dark tunnel that led down deeper into the earth. It finished off in a subway with scharacters located through out the maze. There were A LOT of moments where you did not see anyone in there. A lot of dead space. The finale through the subway was the highlight of the maze. It featured a raunchy bathroom scene, some electronic sparks going off, and a walk through a subway car.

Over all I give this maze a 6. This maze could benefit drastically with a lot more talent through out the maze. There were great opportunities for scares that were missed. I believe the highlight was the end of the maze with the subway theming.

Monster Stomp on Ripper Row: This show was a Jack the Ripper themed show that was held on a very large stage. The show was full of Cover songs from pop music including a very awkward cover of “Monster” by Eminem. The girl handled the chorus well but was followed up by a awkward rap performance by the Jack the Ripper character. The Highlight of the show is when the Stomp element actually was utilized by 4 suspender sporting men with knives and a coffin. There is also a great part of the show involving performers in skeleton outfits and black lights. Over all the show was fun and campy and is the largest show in the park.

Fiends: This is an adult themed Mad Scientist show and can be found located in the Ireland section of the park. The stage is full of sexy nurses in full white nurse outfits and constantly bending over to show off their bright pink underpants. There are alot of sexual innuendos and other adult type humor in the show. It is a very campy style show with a few musical numbers performed by the Mad Scientists and his Nurses. There are also appearances by The Wolfman, A Vampire, and The Creature From the Black Lagoon. They all had their own song and dances through out the last half of the show.

The story goes is the mad scientist wants to create his creature and uses the essence of all of the creatures called upon as well as using a Kardashian brain. When the creature springs to life it is a very flamboyant Blonde male with a yellow tank top and blue speedo who prances and dances around in two mismatched color Converse shoes. The yellow tank top doesn’t last very long before he rips it off. It is a very strange story and show and can be quite amusing to most. Most men who watch the show love the Naughty Nurses and they can be found outside the theater in the evenings for a Photo Op. 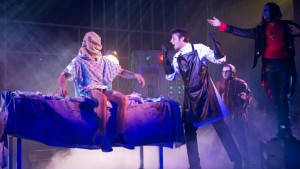 Night Beats: This is another thing I unfortunately missed. This is a show in the large Festhaus located at the back of the park. I did see the stage and the interior of the building and looked quite inpressive. 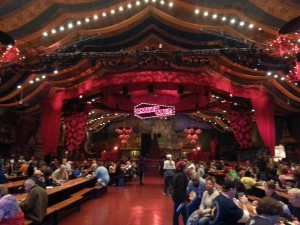 Blood Banquet: This is a fun Dinner and a show opportunity located in the middle of Germany in a nice outdoor courtyard. You pay to enter the event by purchasing a Buffet dinner. The food was fantastic! It came with unlimited drinks and unlimited trips back for food and desserts. While you sat and ate outside you are entertained by the very sparkly portly built Vampire host and is joined by his Maid, his wife, his butler, and a few other characters. They sing songs and interact with the crowd. It was a very fun experience and was very glad it was recommended to me. You can see the show from outside the courtyard but its very worth the money to be inside the show and also enjoy the great dining opportunity. 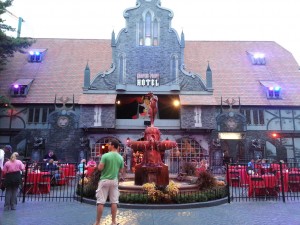 Over all the day was pretty fun. The Howl-O-Scream event was ok. The mazes lacked many elements but were still not a total waste of time. Considering this event is not an Up Charge event, its well worth your time. The night we attended the park was only open until 10pm. We did most of the shows before 6 and tried to do as many mazes as possible from 6-9:15ish. We still were not able to do everything. The highlights for me were the Blood Banquet and the Coasters in the evening. Lets just hope they progress and the event will only get better over time.