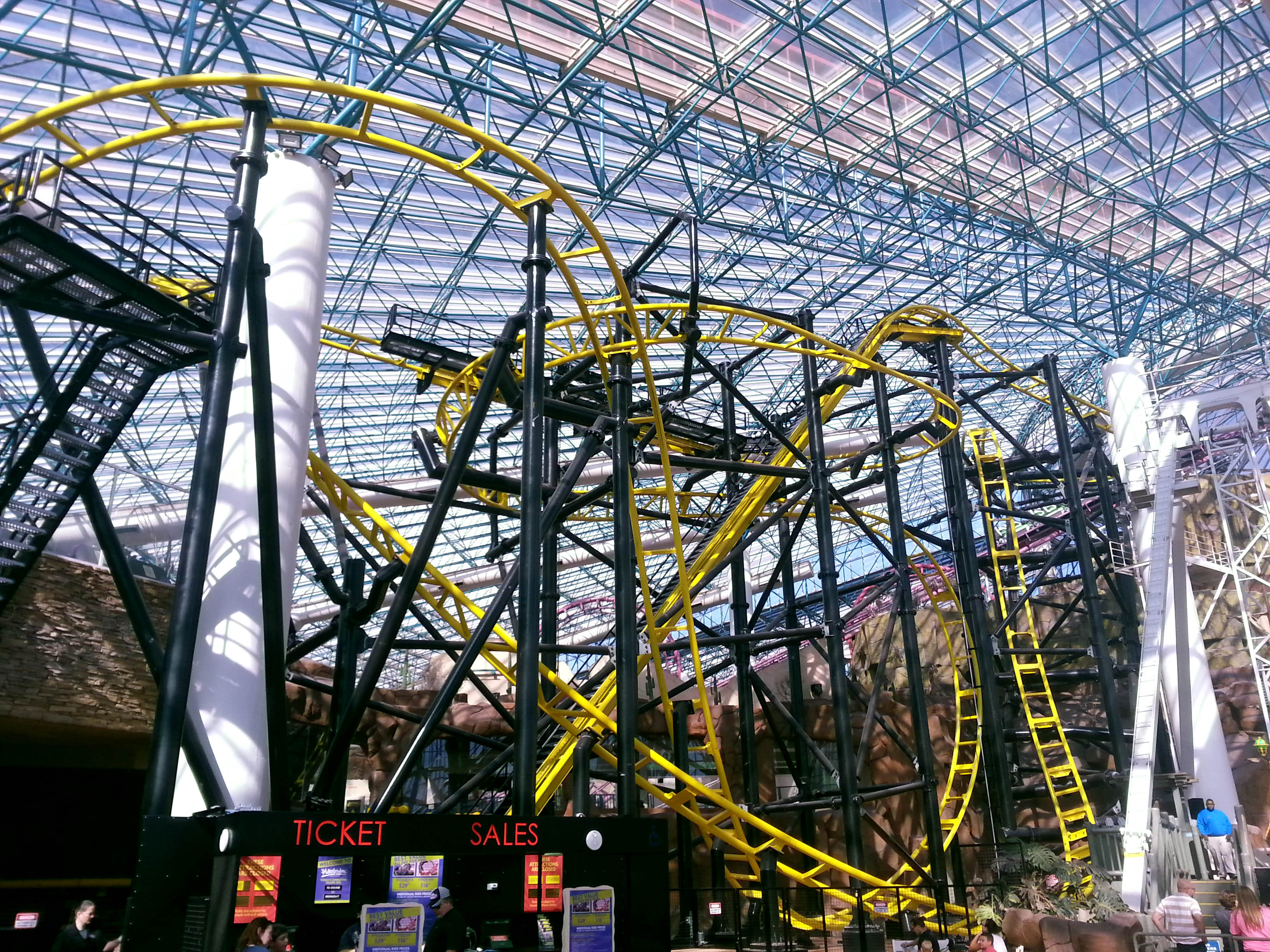 I headed over to Las Vegas last week for work for the week. I made it a point to make sure to stop at all the coasters that the area had to offer. I did not get a chance to head to the stratosphere and do the extreme thrill rides it had to offer. I was just focusing on roller coasters.

This was my first trip to Las Vegas and the whole area is just weird. As someone who does not party, drink, visit gentleman’s clubs, or gamble, this town was just not for me. Its a bit of a hole to be honest. Once you get some alcohol in you and your inside the maze of casinos and winding your way through the glitz of the strip I am sure it is a whole other experience. This was not the way I had seen the town. As an outsider of sorts I was there to marvel at the billions of dollars spent on hotel’s, the detail into the architecture and check out a few of the Roller Coasters that were built back in the 1990s. 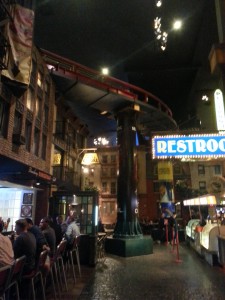 My first coaster evening trip was over to New York New York to ride the “The Big Apple” Roller Coaster. The Ride is located towards the back of the Casino. Part of the track can actually be seen from below from a New York styled outdoor setting. This coaster will run you $14 bucks for one ride but offers an all day wrist band option as well for an up charge. The coaster was built by TOGO back in 1997 for 25,000,000. The trains were replaced by Premiere rides back in 2006 after the coaster had grown a reputation for being very rough. (A rough TOGO? No way….)  The new trains look like Taxi Cabs and feature a lap back with the shin support. They then push down these shoulder restraints that just rest on the top of your shoulders. (well get to these in a minute) The Coaster creeps up a 180 foot lift followed by a very undramatic 76 foot drop. The next hill is actually where your biggest drop is located at 144 feet. By this time I have realized that these new trains may of helped but these shoulder supports are not trying to chop off my head and bashing into my neck uncontrollably. Through every loop and corner your being thrown into these shoulder harnesses. They are useless and I don’t even see the point of these things. In the day and age of Lap Bar only looping coasters this is just pointless. If they did not have these restraints the ride would of been much more enjoyable. 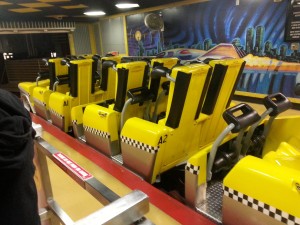 The Big Apple’s last half of the coaster is located on the casino rough and features a Twist and dive element only found on one other coaster in the world, The Mega Coaster in Japan.  This part of the ride is cleverly hidden behind a facade. You can see the coaster lining the outside of the casino and down the strip. Very cool sight to see as you approach the New York New York Casino.

Overall it was a rough ride and those shoulder harnesses are going to kill your neck so be warned. Top 5 roughest roller coasters I have ever been on. 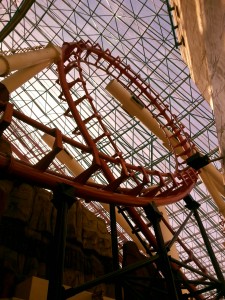 This Arrow Dynamics built roller coaster can be found at the “glamorous” Circus Circus Hotel and Casino at Adventuredome. An indoor Amusement Park adorned wth pink glass which gives the whole park a Pink Tint. The coaster can be ridden for 10 dollars a ride or you can buy an all day wrist band to access all Adventuredome has to offer for $29.  Canyon Blaster  was built back in 1993  and winds in and out of man made mountains that have been placed in the center of the dome. It stands at 94 feet tall and features a drop of 66 feet. You will encountered 2 back to back loops and a back to back corkscrew. There are also two helix turns that wind through the mountain for a grand finale finish. This was honestly one of the smoothest Arrow Dynamic Coaster I have been. Its a fun ride and does not stand very tall but still packs a nice 1990’s style coaster punch. It is in fact the worlds tallest double loop, double corkscrew coaster.

Overall it was a surprisingly smooth Arrow Coaster as I was expecting it to be quite rough. Don’t fear the Canyon Blaster!

El LOCO was built by S&S bthis year and replaced “Rim Runner” a log flume ride previously located inside of Adventuredome. This El Loco stands at 90 feet tall and featured a 90 degree drop. It is the second built indoor El Loco roller coaster after Crazy Bird, and is the second El Loco built in the USA after Steel Hawg. Let me just say this. I loved El Loco. It is a ton of fun! It is not the fastest coaster, the tallest coaster, or has the most inversion, but oh boy is this thing fun! Its is like a wild mouse has been spun out of control and turned on its head. You FLY into those flat turns and are tossed out of your seat pretty much the entire time. It plants you on your head twice and just creeps into the half loops to put you back into an upright position. I rode this 4 times and loved it everytime.  Very much worth the money. If I had any complaint is that is it a little rough at some points but it just adds to the wild factor. 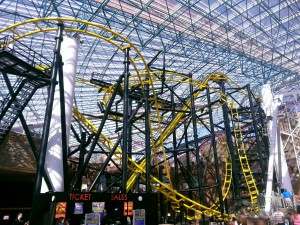 Overall I loved this coaster! Very much so. Highly recomend if your love coasters and are in the Vegas area to make it a point to check out El Loco. It is El Fantastico! 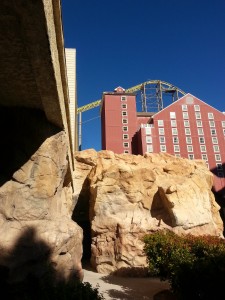 This Hypercoaster is located at the Nevada California state borderline at Buffalo Bills Casino in Primm, NV. It was built in 1994 by Arrow Dynamics, stands at 209 feet and features a 225 foot drop. At the time of opening in 1994 it stood as the worlds tallest Roller Coaster. Located in the back of the neatly designed interior of the Buffalo Bills Casino you will find the coaster station. To ride the coaster once will cost you 10 bucks but an unlimted pass is $21. Knowing this is the close relative of Magnum XL 200 at cedar point I knew to find the magic seat of Car 6 row 2 (second the back row that is not over a wheel) The first drop you will reach speeds of 80 mph and fly through a tunnel and back up the second hill. So far so good. Pretty fantastic. Then you make your first turn over the top of the hill….oh boy its going to be rough. The rest of the coaster you basically bounce around all over the place and you can see the whole train shimey down the track. The finale is a helix that goes through a man made mountain constructed on the outside of the casino and then you enter back into the casino to reach the station.

If your looking for a smooth ride…this is not one. Dont get me wrong, It was fun, but oh boy is it rough! It is a really long coaster at 5,843 feet long. The finale is a helix that goes through a man made mountain constructed on the outside of the casino and then you enter back into the casino to reach the station. This is a real similar rough ride to magnum but is pretty fun just very very rough. One lap on the Desperado and I was ready to head home.

Over all this ride is cool as its part of history as it was part of the Coaster wars back in the 90s. It is the roughest of the Hypers I have ridden but if you happen to be in the area Friday-Sunday I would suggest to stop and check out this piece of history but warned. She’s a rough one.

Vegas was an interesting Trip.  It is way out of the way for most people to drive too just to ride a few spread out coasters over the area.  If your in town on vacation and happen to be around it would be interesting to check out the coasters. If I ever visit Vegas again the coasters would not be something I would want to revisit except for El Loco as it was the best Coaster in town. By far the worst of the bunch is the New York New York Coaster with its neck chopping shoulder harnesses.