This year I made it out to Magic Mountain to see if they have improved from their past less than amazing years of Halloween celebration. Lets take a recap of the Mazes scare zones and other highlights of the event. This year your annual pass gets you into the park and you can enjoy any of the rides but not the mazes. The mazes were a bracelet purchase. $20 for standard bracelets and $30 for VIP line access for non pass holders. $5 discount on any bracelet if your an annual pass holder. We chose the VIP to avoid standing in line all evening. The park is open from 10:30am to 1-am on weekends and 10:30am to 11pm on Sundays. The park offers a “No Boo” necklace to keep the monters away for an additional $5. It is just a glow stick that you wear with the worlds “No Boo”. This is an idea I have seen parks who do have guests who are just there to ride coasters and not do the mazes. I think though if you have a “No Boo” necklace you should not be allowed into any of the mazes. It can ruin the experience for the guests behind you. 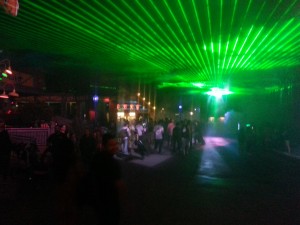 First thing I guess we can start to talk about is they advertise “Terror Track – Rides in the Dark”. This was not true as most of the coasters had lights on. Some had a lot of lights on. I would say no different than a normal operating evening. If you are planning to attend this event just for coasters in the dark I would just plan an evening at the park to experience the “darkness”. 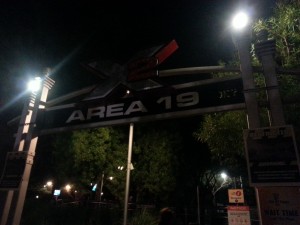 X2: Area 19. This was an attempt to re theme x2 for Halloween. They say it is a Journey through an abandoned facility captured by aliens. This was very scarcely themed. They had a big alein on the first level of the station and don’tblink because you may miss it. They updated the video in the station with a space theme as well as changed the audio soundtrack on the ride itself. The sound track on the ride its self was the most significant update and was pretty cool when you could actually hear it.

As far as shows go they had the stage by Full Throttle hosting Voodoo Nights which was music being played by a DJ and a live drummer through out the evening. Guest would stop to watch or maybe dance a little bit. We did not make it to the High Sierra Hypnotist as we did not have enough time.

They do offer a few cool events for the kids during the day which include Witch HazelPumpkin Patch crafts, Looney Tunes trick or Treat Masquerade and Looney Tunes Character meet ups. These events are offered from 12-5 during the day which is pretty neat and gives the kids something to do. This event is free to attend and is included with our general admission ticket or annual pass.

Regular Show Fight Fest Zone II- This is a fun photo op booth setup over by the theatre. We stood in line FOREVER. well about 45 minutes….they would do 2 people ever 10 minutes or so. It was painfully slow of a line. We tried to get in there but our patience wore too thing and we jumped out of line. They play cartoons on a screen outside to entertain you which is what helped ease the pain of standing in line for what seemed like forever. We did get a cool pin out of the deal though.

SCARE ZONES. I am not going to break down each scare zone as there was not a lot of theming or very specific details to get into. They had a vey themed areas. They had a zombie themed area, The wastelands, and an area on top of the mountain by Garden of Darkness. The Garden of darkness area was the best of the bunch. It was dark and had the most talent running around. I did see one of the best uses of Stilts at any haunt ever. The actor would crouch way down over by a garbage can and wait for the guests to walk by. They would then spring up and stand over the guests and this monster of a Scharacter was now standing over you. Very cool effect. Bravo.

The Willoughby’s Darden of Darkness: This maze was located at the top of the mountain in the old Sky bucket ride house. The entire maze was covered in green shredded material. You wondered your way through the maze wondering where everyone was. I kept looking for people to scare you but they were no where to be found. Finally towards the end of the maze you finally seen some talent inside to scare you. They were also covered in the green shredded material. I am not sure how this was suppose to be a garden. It was just green material all over the place. There were some good ideas of hiding people in the green material but you could obviously see them as a large bump in the wall (for those of us looking perhaps). Just wish it had more garden elements. It was the worst maze of the park so it only gets better from here on out. Over all rating: 4

Chupacabra: This maze was located up in the plaze by Panda Express. It was a mexican themed maze with the urban legend, Chupacabra. There were Scharacters dressed up as humanoid Chupacabras and there were even some small models of the Chupacabra in the maze as well. It was not covered by a roof and you were walking through walls mainly. It was not a total wreck of a maze but it was not very well done. The talent behind the scenes had good intentions but they hopefully over the years will get more practice and we will see something better from them in the coming years. Lets just hope this is something they will move on from.  Overall Rating is: 5

Reds Revenge: This wasa twist on the classic story Little Red Riding Hood. You had a pres how where youwere showing a bit of the history of Red and at the end are surprised by a loud explosion of air and rumble of subwoofers in the floor. The maze wonders through the woods of Werewolves and little villages. They had really stepped up their game here. Lots of great detail was put into this maze as well as the costumes. I was disappointed with the talent and they were not doing too great of a job of entertaining or scaring. There were a few good moments in this maze and was one of their best mazes of the evening. Overall rating 7.5

Toyz of Terror 3D: This maze was a 3d maze and guess what…..FREE GLASSES! Way to go six flags. This is your typical florescent black lit Halloween maze but this was with Toys. People dressed up as toys, dolls and decorated with toyz through out. It had one of my favorite elements of a fun house. The spinning room with the bridge. I love this effect. It gets me every time. They did had some creative uses with the paint and the 3d worked well here. Overall rating 7 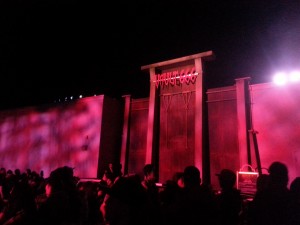 Vault 666: This was a maze based on an old abandoned facility that has recently been discovered with years or secrets. Lots of mutations and other type scharacters were through out this maze. I would almost say it has an Asylum feel. The girl in the beginning told us that they were doing human and animal experiments and I think that was part of the look of the scharacters inside as well. It had some great moments in this maze. I remember a guy running out of no where right into an electric fence and they had an actual electric shock effect fire up and shocked the guy coming at us. With a great pre show and great set design it was one of the better mazes in the park. Overall rating: 8

Willoughbys Resurrected: This is a big fancy scary mansion themed maze. It was well themed and was a fun little walk through. Did not see very many scharacters unfortunately when I had went through. There were bedrooms, libraries, and other types of rooms. It had a unique grey look through the whole maze which was different than most mazes I had seen before. I had a great experience in line for this maze. A creepy wet haired very short lady was moving EXTREMELY slow. She was stalking down a girl in front of us in line. She moved slow and with a creepy motion under the gates up around us for the line. She bent and contorted into strange positions. Very entertaining and very dedicted. Overall rating: 7.5

The Aftermath: This was a post Apocalyptic themed maze. It had a really nice entrance built up and you entered into a hallway full of fog and a light pointed right at you to blind the guests. This was perfect use of light and fog and wish who ever lit this did more work through out the park. This is how its done. The rest of the maze was placed right in the middle of the stunt show stage. It was wide open and you walked through old cars, storage bins and other wasteland type props. Zombies would jump out to scare you here and there but was very scarce. After the entrance with that awesome fog and light effect the rest of the maze fell flat to immerse you into darkness of into a scary environment. Was a bit of a let down. The whole maze had no roof so it is hard to immerse your guests and you must figure out another way to make that work. Just wish they had because It had all the right intentions. Overall Rating: 6 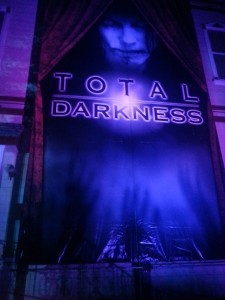 Total Darkness: This maze is exactly what it sounds like. PITCH BLACK walk through. groups ofeight get in a line and are told to hold on to a rope. I had the pleasure of being the first one to lead everyone through the darkness. The maze twists and turns and you must find your way through. They have night vision on inside so they can monitor what guests are doing. They will whisper “this way” to help get you through. Pretty cool expierence. It even had one of my favorite maze elements, the inflatable claustrophobia hallway! I think this maze lacks a few things. Maybe some strange material on the walls that changes to freak out your guests as they work their way through the maze as well as some actual scares. Its such a strong concept I wish they would do just a little bit more with it.  Overall Rating 8

Reflecting back on this trip it was a pretty well done Halloween event in a few of the areas of the park. It is a large park and hard to put all your energy through out the park. I think over the years we can expect to see more from Magic Mountain as they have already proved to us that they are improving each year. Great Job you guys and keep up the improvements!