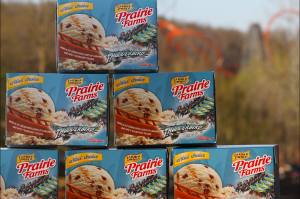 Holiday World today announced a new partnership with Prairie Farms to name their new ice cream flavor, Thunderbird to go along with the New For 2015 roller coaster which shares the same name.  The ice cream will be vanilla flavored with caramel and spicy scorched pecans.  The ice cream will be available at the park as well as in stores in 27 states around America. Thunderbird opens on April 25th with the opening of Holiday World. Check out the press release below.

Thunderbird Ice Cream will be available at Holiday World this season, plus in half-gallon cartons at grocery stores that carry Prairie Farms Ice Cream in the Midwest, East Coast, and South.

Holiday World opens for the season on April 25; Splashin’ Safari opens May 13. For more information about the parks, visit HolidayWorld.com