This week the guys discuss the future of Cedar Fair dark rides, a really exciting rumor at Sea World and both coasts of Trader Sams

The Legend is back from his cruise, and Drew left for Jamaica.  Clint quits his job and becomes a professional podcaster (does not make the show better).  We talk about Kings Islands new ride, Wild Adventures new ride, Skline Attractions new ride, Toyko Disneylands new rides.  We talk a lot about new rides.

Two new family rides, the largest Starbucks store in the Tri-State, and other improvements are all part of Kings Island’s plan for next summer.

The first of the new rides is Woodstock Gliders, a classic flying scooters ride from Larson International. The ride features eight two-person planes that glide 28 feet above the ground. As the planes begin to rotate, they will fan out over a large area. Each plane has a stationary rear wing and a moveable front wing which allows the guest to control the flight and alter their ride experience from mild to wild.

Woodstock Gliders is similar to the Flying Eagles, a popular former Kings Island ride that entertained more than 12 million guests during its 32 years of operation from 1972 to 2004.

The second new ride is Snoopy’s Space Buggies from Zamperla, an attraction designed for children of all ages to enjoy with their parents or grandparents. Six four-seat vehicles will bounce up and down while rotating in a circle.
The new rides will be located next to each other in the 14-time, award-winning Planet Snoopy kids’ area of the park.

END_OF_DOCUMENT_TOKEN_TO_BE_REPLACED 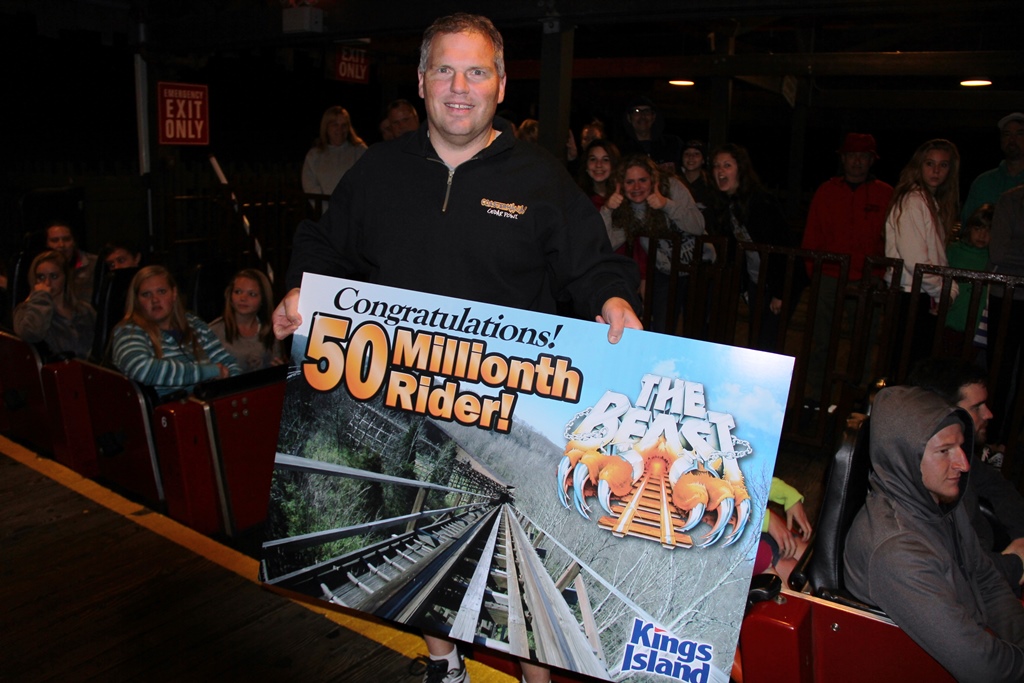 An Ohio man took the 50 millionth ride on a roller coaster that opened 35 years ago at Kings Island.

Mark Specht of Berea, Ohio took the ride Friday on The Beast during the park’s Halloween Haunt event.

Specht received a Beast t-shirt, cap and ornament, picture frame, a 2015 VIP tour for eight guests and a large sign proclaiming him as the coaster’s 50 millionth rider.

The Beast sprawls across a densely-wooded, 35-acre site at speeds up to 65 mph, with a ride time exceeding four minutes.

The ride was constructed in less than a year, after two years of research and design – all by Kings Island personnel. By the time workmen had completed the massive Beast construction in March of 1979, they had used 650,000 board feet of southern pine lumber; 37,500 pounds of nails; 82,480 bolts and washers and 2,432 square yards of concrete.

Each of the three trains on The Beast has traveled a total of 889,850 miles. That’s the equivalent of more than 35 times around the world!

Kings Island will be open for three more days this season after this weekend, October 31 through November 2.

Kings Island had a very successful kick of to there first ever Dog Days event this past Sunday with more then 230 dogs and dog owners in attendance.  Dogs were highlighted in a dog parade and costume contest.  They also had a chance to go trick-or-treating, participate in an agility course, enjoy doggie treats, and more.  If you are interested in bringing your K9 out for a day of fun at Kings Island, you can join in the fun every Sunday in October from noon to 6pm.